I love scrapple ! I was raised on it. There was scrapple festivals, go to an auction and you would find a scrapple sandwich. Took a pig to the butchers ,you would be sure to have scrapple in with the rest of the packages of pork . Then… I married and moved from the eastern shore to Ga.

I was shocked to find no scrapple ! There were mornings my mouth watered for a slice of scrapple. Well to be sure when we went back to visit the eastern shore ,we took a cooler!! One problem … A cooler can only hold so much , and it might be a year before we could get back to refill the cooler.😟

That’s when I decided to make my own.. I soon learned there are two kinds of scrapple,one made with a little pork and cornmeal, the other one made with everything but the squeal ,a little cornmeal,and buckwheat flour.

Cookbooks had no good recipes, for the family didn’t like the cornmeal flavored scrapple. So for years, I searched for a good ol recipe. Then one day on my iPad I pushed in eastern shore scrapple, to my delight two popped up . Here’s the one I tried..

Eastern Shore of Virginia Recipes
Provided by Will Brown
Scrapple
First the history:
Abstacted from _Thirty Five Receipts From “The Larder Invaded”_ by William Woys Weaver, The Library Comapny, 1986, Philadelphia.
Scrapple is a medieval dish, a sort of a pot pudding that evolved… In Wesphalia and northern Holland, the region where Philadelphia scrapple evolved, was thickened with blood and buckwheat flower. In Philadelphia, unfortunately, blood had a commerical value in the processing of sugar and was far too valuable for the likes of scrapple. The buckwheat was cut in half with cornmeal, allowing even less ground meat per pound of scrapple than its European counterpart. It was no longer in the haute cusine category.
Scrapple was eaten in connection with butchering day festivities, it was therefore a cold weather dish made from October to March. Although is is available now all year round, it was never then considered a hot weather food. The following is Elizabeth Nicholson’s receipe and probably dates from the 18th century:
“Take a pig’s haslet and as much offal lean and fat pork as you wish, to make scrapple; boil them well together in a small quantity of water until they are tender; chop them fine, after taking them out of the liquor; season, as sausage; then skim off the fat that has risen where the meat has boiled, to make all soft, throw away the rest of the water, and put this altogether in the pot; thicken it with 1/2 buckwheat and 1/2 Indian. Let it boil up, then pour out in pans to cool. Slice and fry it in sausage-fat, after the sausage is done.” From _What I want to Know; or the Hints on the Daily Duties of a Housekeeper_ by Willis P. Hazard, 1856
Note: a pigs haslet is the heart, the liver and other edible viscera of the animal. I had alway thought that scrapple was made of the meat of the head of the pig. Of course this would be considered offal meat: the jaw and face meat (not the brains).
The seasoning used were sage, salt, pepper, and cloves. Here is an up-do-date adaption of Elizabeth’s Nicholson’s receipe.
3 lbs of fatty pork

This recipe was a hit in this household!!

Since it has been cold , it is butchering time.. Hams, sausage and so forth until it came time for the scrapple making. Here are a few pictures on how I do it . 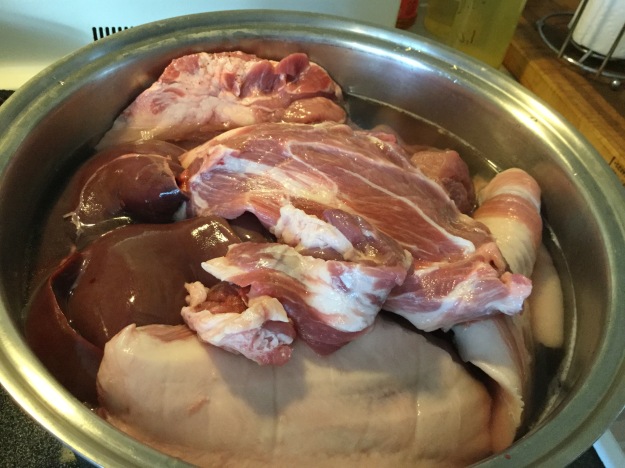 Clean the head,heart and kidneys and fatty scraps of meat,put into a heavy kettle for it needs to cook for awhile ,the more meat the longer the time. You want the meat soft,when the meat is soft than add the liver to the kettle ,cook until the liver is done( about twenty minutes.) put meat on cookie sheets to cool.

Then put meat and fat though a grinder,the yellow looking crumbles is a bread slice that I put though last to clean out the grinder.

Strain the broth as to the recipe instructions and put it all in big heavy kettle ( meat , broth and seasonings)

I save some of the broth to make a paste mixture out of the cornmeal and buckwheat flour so it doesn’t get lumps in it, when the paste is smooth, add to the kettle ,turn on heat, stirring often.Here is a picture of it almost ready for the pans.

Here’s one pan ready for the frig.

And here is a picture of all the hard work to be enjoyed! Sorry, I didn’t pour the coffee in the cup.😟

Now that the butchering is done ..it is time for sewing !👏👏

I think I’ll add this border on to the bear paw quilt for Mama in law.

No sewing today ,I’ll post on that another day. It is butchering time again.. colder weather, deer hunting,and pork only mean one thing…Sausage and deer bologna . My son who loves to hunt always supplies us with deer meat that to be honest I do not like in roast or in deer burger. Deer bologna is so much better!!! Sliced thin then put between bread with tomato, lettuce and onion is wonderful!!

so here are some pictures on our work, 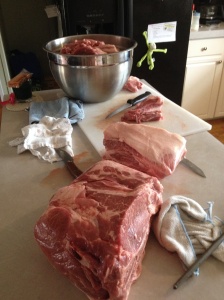 cutting up pork meat  that will be add to the deer meat and also be made into sausage.

sausage seasoned and set back into frig. The recipe that I use,

mix well into meat then grind.

i put the bones of the pork into a pot and make a brunswick stew. If I have a lot of stew, I freeze for another meal.

deer meat and pork grind together for bologna. The recipe that I use is an old one from Hubby’s

mix into your meat then let it set for a day.Grind. Stuff into bags and smoke.

glad for some young muscle help! 🙂

bags ready to be smoked. 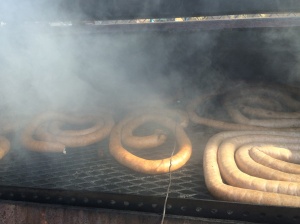 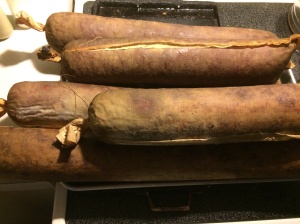 smoked bologna ready to be sliced and eaten!

Have I made anyone hungry? 🙂

Have a good week, Deb